The information found on this page was last updated December 2017. To learn about Platte River Power Authority's most up-to-date carbon plan for the future of energy resources follow this link: https://www.prpa.org/irp/

In July 2017, the Platte River Board of Directors agreed to model a zero net carbon electric generating resource scenario for all four communities and communicate the results of the study to stakeholders and the public. This site contains background regarding the modeling as well as a copy of the final report.

Platte River is a statewide leader in the development and use of non-carbon energy resources.

Platte River was the first utility in the region to provide wind energy to customers in Colorado and has more than tripled its wind and solar supply since 2013. Currently, more than 30 percent of the electricity supplied to Platte River’s owner communities is twice the national average.

Platte River continues to evaluate its generating resource mix and will add more non-carbon energy resources when advantageous opportunities arise, as part of its overall strategy to diversify resources while balancing financial and environmental interests. In September 2016, for example, Platte River announced that Craig (coal-fired) Unit No. 1 will be retired by Dec. 31, 2025. During 2017 Platte River sought proposals for additional wind resources and received several competitive offers.

Non-Carbon resources as of 2017 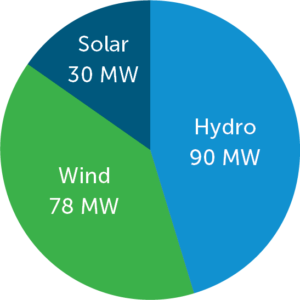